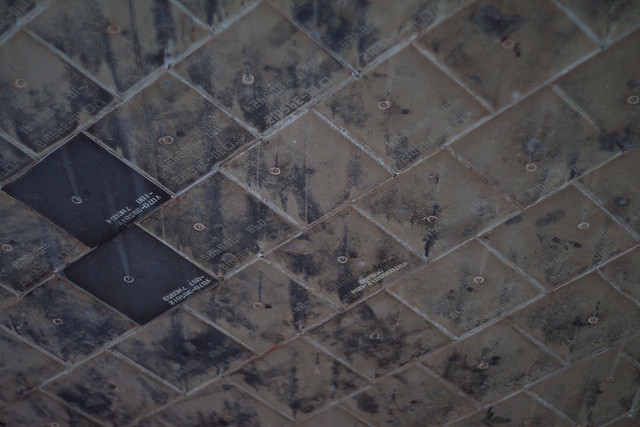 What the tiles are

Each of the Space Shuttles carried tens of thousands of paving-stone–sized ceramic tiles. The tiles insulated the spacecraft from the heat of re-entry through the atmosphere. The idea of the Space Shuttle was that it would be re-usable, yet big enough to carry a separate satellite. The tiles were key, because they could protect a large area and be replaced individually as needed. They were made from ceramics that were highly advanced for their time. Refining and installing the tiles was unexpectedly difficult, and caused early time and budget overruns.

What the database is

I don’t know what form the database takes. Most likely, as far as I’ve inferred, it’s a large collection of paper records recounting how each tile was installed and its state after each flight, probably with sketches or photographs. This is just a best guess.

The most technical information I have is from Round Trip to Orbit: Human Spaceflight Alternatives Special Report, OTA-ISC-419, a Congressional Office of Technology Assessment report from 1989 (p. 50):

The team is developing an automated work authorization document system (AWADS) that will enable the technicians to document the condition of each tile, determine any necessary repairs or replacement, and generate work instructions. With the automated system, the computer, which is programmed to recognize each technician’s voice, prompts the technician to find the correct tile, enter its number, and report on its condition in a systematic way. The TPS quality control technician first inspects the tiles after each flight and enters the part number, location, and condition of each tile into a computer database by voice. The computer’s central database automatically generates a problem reportin[g] electronic format, which a TPS engineer uses to identify and recommend proper repair procedures for the tile. The problem report proceeds through an electronic signature loop until final approval for the repair. Finally, the TPS technician uses the voice data entry method to indicate tile status as repair procedures are completed.

Because it’s extremely hard to find other references on the internet, I assume that AWADS was never fully implemented as described here. However, this passage suggests that there was at least a paper trail of work records keyed to individual tiles. This is one of many threads of circumstantial evidence. (A second thread is the hearsay stories that docents in at least one Shuttle-holding museum tell to visitors. A third is that NASA sent out some souvenir scraps with notes on when they flew in space.)

No primary source that I’ve seen positively and specifically describes a database. However, taking the circumstantial evidence together, and considering NASA’s culture and the nature of the problem that it faced and solved, I confidently assume that there was indeed a database of some kind. It may be on paper, or split between different generations of the Thermal Protection System, or otherwise less than ideal. But I believe it exists.

Why the database is interesting

Large-scale, highly automated manufacturing is a definitive part of material culture in the rich world today. It produces our inexpensive but reliable machines and electronics. An integral part of many of these manufacturing systems is component tracking: the ability to know the history of a given object over its entire lifetime. For example, a washing machine manufacturer might be able to take an apparently unremarkable series of maintenance reports and correlate them to learn that a specific CNC unit is subtly malfunctioning when it machines a certain type of gear. QR codes and RFID are two familiar technologies that came into everyday life from manufacturing logistics.

The Shuttle tile database was one of the first of these systems that have since become integral – though usually invisible – parts of contemporary life. That alone makes it historically important.

It’s also valuable as a way to illuminate the labor, engineering, and political conditions in which it grew. The Space Shuttle program was weird. It balanced many technical shortcomings against broad public affection; it was both military and civilian; it was a swan and a flying brick. It was designed in the 1970s and flew into the 2010s. Its awkward, accident-prone, and unusual but effective tiles are one good way to begin understanding the Shuttle program and the contexts that it tied together. It’s fitting that the surviving Orbiters are on display in museums where ordinary people can wander up and marvel that these spaceships are covered in writing. My goal is to understand that writing better. I hope that ordinary people with newer database tools – and visualization techniques – can use the tile data to tell new stories about the Space Shuttle program, where it came from, and what it meant.

What I’ve tried so far

I’ve sent word out through several channels to find people who might know something about the database. I also cold-mailed Boeing’s public archivist, and talked with the Corning Museum of Glass (because the tiles are ceramic), among other institutions. Everyone I spoke with was generous with their time but had little concrete information.

I seek the lifetime component records for all individual thermal tiles (HRSI, LRSI, TUFI) that reached orbit on STS Orbiters. These records would include manufacturing date, all inspection events, etc.

Records relating to either (A) other parts of TPS (for example, gap fillers, RCC, and FRSI) or (B) each tile's current disposition (for example, whether it was donated as part of an Orbiter) are desired but not required by this request. Please do not include them if doing so would significantly increase processing time or cost, but do inform me that they exist.

In short, the data I’m looking for would be sufficient to create a timeline of all recorded events in each operational tile's life from initial manufacture through decommissioning, and to exactly locate its position on the Orbiter body.

I understand that the data may not be in a standard database format. As much as possible, I would like it delivered in machine-readable form (for example, as formatted text files, not as scans of printed pages). If it's in a specialized database format, please supply any available guidance on parsing it with standard Unix tools. If you have any questions about preferred formats for delivery, please get in touch.

The tile lifetime data may have been partly collected by AWADS, the Automated Work Authorization Document System. The tile location data may be from the database that was used to create the diagrams on pages 2 and 4 of this NASA document: http://www.nasa.gov/pdf/124112main_msg075.pdf

They denied the FOIA. Some excerpts:

[…] it is unclear what specific records you are requesting. [….]

We have been informed that as part of the Shuttle closeout, Shuttle records, exceeding 80,000 boxes of data, were retired and archived at the Federal Records Center in Ft. Worth, TX. While it is possible that a manual search could be conducted for a specific Shuttle record if you were able to identify one using Category I and II criteria, a manual search for that record, which would not be a non-random, reasonable search. Please be advised that it is expected that a manual search would result in excessive direct charges.

This is a fair response. NASA is right that my request was basically “Hey, tell me about…”, not “Please give me record XYZ-123.” They are not librarians; they have no duty to help me find what I want as well as giving it to me.

So now I’m looking for people who can help me find it. I want to know enough about the tile records to FOIA them specifically. Or, of course, some other way in.

Did someone you know work on the Shuttle tiles? Or on something related? Or in the same building? Ask them for more information!

Do you have old NASA books? Or are you really, really good at web searching? See what you can dig up!

Do you know someone who might know something at an air and space museum? Or a materials science department? Did your old databases professor once mention something about a Space Shuttle? Get in touch!

Please do not swamp NASA (or their contractors) with rude, burdensome, or poorly constructed requests, via FOIA or other channels. We’re all on the same team here: against forgetting, not against the institutions that might remember.

I don’t own the idea of trying to make the Shuttle tile records public. I encourage you to search on your own. But I am very interested, and eager to spend more time and effort. I’m running Twitter ads for this, and I would contribute resources to digitizing and hosting the database if necessary. With any information or advice you want to share, get in touch with me at @vruba on Twitter or by e-mail at celoyd@gmail.com.

Are you a conspiracy theorist?

No. I don’t think that the tile database not public for any less than honorable reason, or that there’s anything at all shady in it. In particular, I don’t expect anything in the database to contradict the consensus accounts of the Shuttle disasters.

I bring this up because people in public-facing jobs at big institutions, who have to deal with a lot of cranks, sometimes assume that’s why I’m asking for information. After several misunderstandings, it seems worth spelling out that I seek the database for the sake of the database, not in the service of any unusual theory.

I think the database is not already public for three reasons: lack of funding (for archive/history/education work at NASA), ordinary bureaucratic inertia, and an underestimation of public interest. The first two forces are stronger than a conspiracy. I hope this project can help change the third.